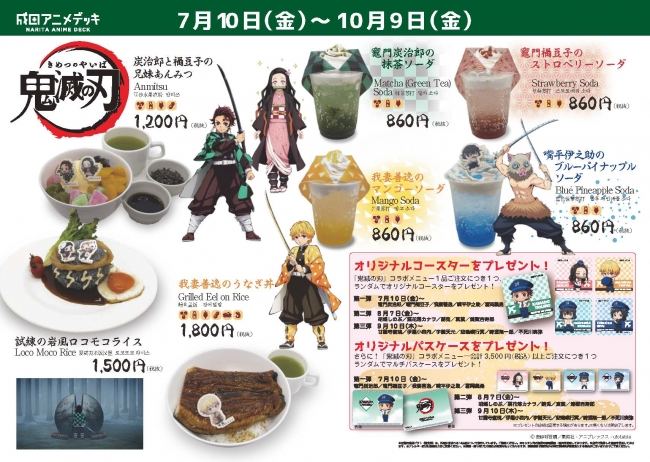 At the sky gateway, on level 2 of the Central Building of Terminal 2, Narita International Airport, “Narita Anime Deck” has been opened. It is a new style entertainment facility complex where you can experience and enjoy Japanese animation culture and characters which Japan can show off to the world, in various forms such as character goods, foods, events and photo spots.

“Narita Anime Deck” is divided into three main areas:Character Goods Shop,Eat-in Restaurants and Entertainment Cafe. “Narita Anime Deck” will be in collaboration with the popular anime “Demon Slayer: Kimetsu no Yaiba” from July 10 (Fri) to October 9 (Fri), 2020. During the event, a series of limited-edition co-branded items will be available for sale, as well as co-branded meals.

※The following limited-edition items are scheduled to be available on July 10 (Fri).

During the event period, customers who make a single purchase of over 3,500 yen (tax included) at the Narita Anime Deck will receive an Demon Slayer ticket holder for the full price.

*Limited quantity, while supplies last.
*Patterns are random.
*Limited to two items per person at a time for the  sale of “Demon Slayer” x “Narita Anime Deck”.

After August, Narita Anime Deck will be selling other “Demon Slayer” merchandise as well!