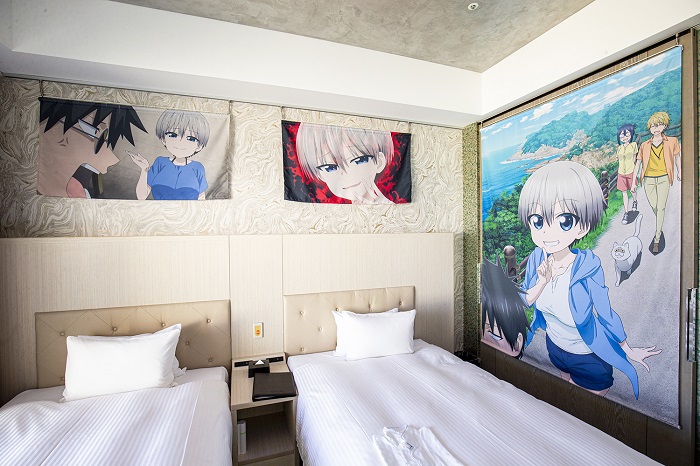 Tokorozawa Sakura Town features shrines, shopping malls, cafes, business spaces, and other facilities.
Besides, “Kadokawa Culture Museum”(Kadokawa Musashino Museum), the first building in Japan to combine a library, an art gallery and a museum, which was built by renowned architect Kengo Kuma, is also located in Tokorozawa Sakura Town.

The EJ Anime Hotel is one of the highlights of Tokorozawa Sakura Town. The EJ stands for “Entertainment Japan” and is designed with the concept of “staying in a story you love.” The concept of the EJ Anime Hotel is an experiential hotel that combines anime, games, special effects, idols, and other cultures that Japan is proud of. In addition to interior decorations and original merchandise, all rooms are equipped with large projection screens and high-quality audio equipment. The hotel’s special restaurant will also offer a variety of meals inspired by the collaboration anime.

As a commemoration of the opening of Tokorozawa Sakura Town, the EJ Hotel opened on October 1 (Thu), 2020, and held the Grand Opening Ceremony on September 30 (Wed), 2020, with the popular voice actor Yūki Kaji, who is in charge of the hotel’s elevator broadcast, as the guest of honor .
Yūki Kaji said, “As a fan of anime and manga, I’m very happy to be able to welcome such a fun hotel and to be able to serve as the announcer of the hotel. I hope that every guest who stays at the EJ Anime Hotel will have wonderful memories of it.”

Current collaborations with EJ Anime Hotel include “Bofuri: I Don’t Want to Get Hurt, so I’ll Max Out My Defense.””Uzaki-chan Wants to Hang Out!””KonoSuba: God’s Blessing on This Wonderful World!””A Certain Scientific Railgun T” “Yuki Yuna Is a Hero”. Rooms are now available for reservation on the official website.

<Uzaki-chan Wants to Hang Out!>

<Yuki Yuna Is a Hero>

A Certain Scientific Railgun T / Bofuri: I Don't Want to Get Hurt / EJ Anime Hotel / KonoSuba: God's Blessing on this Wonderful World! / so I'll Max Out My Defense. / Tokorozawa Sakura Town / Uzaki-chan Wants to Hang Out! / Yuki Kaji / Yuki Yuna Is a Hero