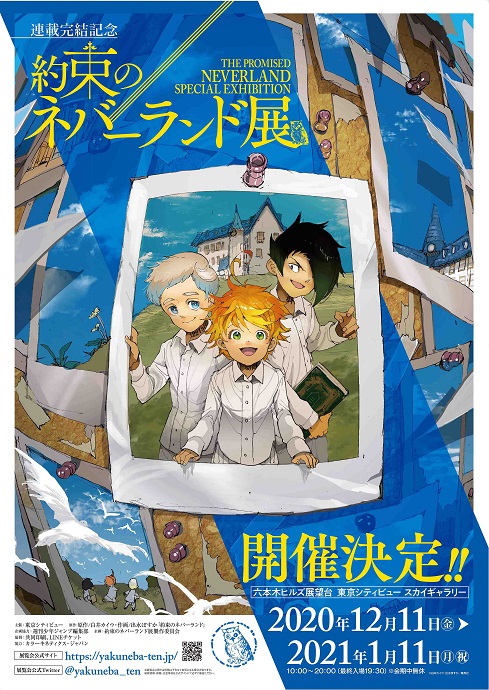 The Promised Neverland (約束のネバーランド) is a Japanese manga series written by Kaiu Shirai and illustrated by Posuka Demizu. It was serialized in Weekly Shōnen Jump from August 2016 to June 2020. The story follows a group of orphaned children in their escape plan from an orphanage.An anime television series adaptation by CloverWorks premiered from January to March 2019. A second season has been announced to premiere in January 2021.

To commemorate the completion of the original “The Promised Neverland “, the Tokyo City View Indoor Observation Deck will hold its first “The Promised Neverland” exhibition from December 11, 2020 (Fri) to January 11, 2021 (Mon), where visitors will be able to view a collection of materials dating back to the beginning of the serialization of this work, as well as a retrospective of the journey from the shocking first episode to the touching final episode. In addition to exhibiting the original paintings and famous scenes, you can also learn about the background of the works through various materials. In addition, the the Tokyo City View Indoor Observation Deck , will be the venue for the exhibition, where you will be able to see the Tokyo scenery by day and by night, centered around the Tokyo Tower.

At the entrance to the exhibition, a large 17m x 6m banner will be displayed at the top of the viewing window, compiling the cover illustrations for each volume of the comic. There will also be a photo booth for the characters. Don’t forget to take in the beautiful night view of Tokyo while enjoying “The Promised Neverland “!