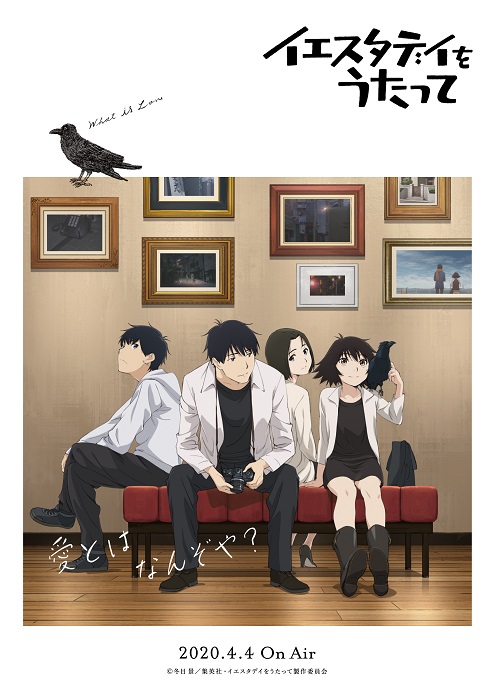 Sing “Yesterday” for Me (イエスタデイをうたって,Yesterday wo Utatte) is a Japanese manga series by Kei Toume. It began serialization in Shueisha’s seinen manga magazine Business Jump in 1997, and it moved to Shueisha’s Grand Jump magazine in November 2011 until it ended in June 2015. It was collected in eleven tankōbon volumes. An anime television series adaptation by Doga Kobo premiered on April 4, 2020.

The story is based on the story of the main character, Rikuo Uozumi , and the men and women around him, who struggle with life, dreams and love. The animation is faithful to the setting of the original film and is set in the small neighborhoods along the private railroad line near Shinjuku 20 years ago. The story revolves around Shimokitazawa Station to Matsubara Station, and the animation faithfully depicts the social scene of 2002 as set in the original film, including home phone and public phone as the main means of contact, analog television at home, and video cassette recorders.

The following stages are located around Kitazawa and Matsubara stations.

Props and art settings that give a sense of the times.

A detailed presentation of the original famous scenes.

After college, Rikuo Uozumi, a boy without much ambition in life, takes on a job at a convenience store. The days pass by uneventfully for Rikuo until he meets his former girlfriend and classmate, but especially thanks to the unusual Haru Nonaka, and her pet raven…

Rikuo Uozumi (魚住 陸生)
Voiced by: Chikahiro Kobayashi
Rikuo is a college graduate unsure about his future. Currently working in a convenience store. His hobby is photography.

Shinako Morinome (森ノ目 榀子)
Voiced by: Kana Hanazawa
Shinako is Rikuo’s classmate from college. She is currently working as a high school teacher.